0 Cyclades Diaspora around the world 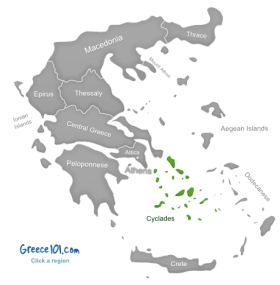 The Cyclades are one of the bigger island groups in Greece, and chances are that you have seen photos of islands in the Cyclades as Santorini, for example, is usually featured in every single Greek calender and photo book you can find. The islands are building a circle around Delos, a sacred island, hence the name Cyclades, this can be roughly translated as “islands arranged in a circle”. Around 120,000 people live on the 33 inhabited islands. There is a total of 2,000 islands, and islets in the group. Some of those islets, however, are not much more than just a huge rock.

The only ways to get to the Cyclades is either by ferry or by plane. All of the bigger islands have their own airport.

If you plan on spending some time in the Cyclades, you will most likely want to visit a variety of islands. Island hopping is very popular, and the ferries run multiple times a day. However, be aware that ferries are dependent on the weather and can be canceled. Some of the bigger islands have a good bus system which makes it easy to get around.

While the Cyclades do have some historical sites, they are usually not the main reason why people want to visit those islands. When it comes to the Cyclades, the scenery is the biggest appeal. The blue skies, clear waters, the beautiful beaches, and the contrast of the white houses against the blue sky are what attracts people to this region of Greece. It is also a great place for diving and snorkeling. You will not have a problem with finding a diving school on the islands. Santorini alone has four or five of them.

What are the places you should not miss in Cyclades?

Santorini is the most popular of all Cyclades, and if you have never seen a photo of the white houses with the blue roofs, then you must have been living somewhere on the moon. But it is not just the architecture that is beautiful. The whole island is a natural wonder and a feast for your eyes. Santorini has an active volcano. Visit the black pebble beach, and then the white beach for a contrast. Santorini also has a great hiking track from Fira to Oia (you can walk it both ways, but it is a lot more pleasant doing it from Fira to Oia, and not the other way around).

Some other places of interest on Santorini are:
- Vothonas: A very interesting little town as the building were carved from the ravine the village is located in.
- Monolithis: This is ideal if you have kids with you as the water on that beach is very shallow and safe.
- Oia or/and Ia: These are the villages from which you get the best view of the sunset, as in other villages on Santorini, you will usually realize that the sun sets behind the volcano.
- Aktrotiri: A very interesting, historical site.
- Fira: a lovely, but very busy town on a cliff.

Mykonos is almost as popular as Santorini, and you will notice that there are quite a lot of parties going on, and the prices are more expensive than on the other islands. While Mykonos has a lot to offer, you might want to think about staying in one of the smaller towns as the main towns are usually very busy, and can be noisy in the middle of the night. Places of interest on Mykonos are:
- The Windmills in Mykonos Town
- Little Venice in Mykonos Town
- Folklore Museum
- Archeological Museum of Mykonos
- Psarou Beach (upmarket beach)
- Paradise beach (party beach)
- Agrari beach (A little calmer than other beaches)

Naxos makes less money from tourism than other Cycladean Islands as largely relies on its income from the agricultural sector. It is a great alternative to the busier islands, and (a little) less touristy. You can
- Appollo's Gate (on a little islet in the harbor of Naxos Town)
- Cheimarros Tower
- Dimitra's Temple at Sangri
- Kouros of Melanes and Apollonas
- Beaches with crystal clear water
- The old Castro

While Paros is the second largest island in the Cyclades, it is not the second most popular destination (those spots are taken by Mykonos and Santorini). It easily takes the third spot, which means that it is also a very busy place during summer. Paros is famous for great windsurfing, so you might want to give that a try while you are there.
Some of the sights to see on Paros are:
- Panagia Ekatontapiliani (the church with a hundred doors)
- Lefkes Village
- Too many great beaches to name, so try to see a few each day instead of just staying in the same spot during your whole holiday
- Naousa (stop for a drink and something to eat in the fantastic tavern)