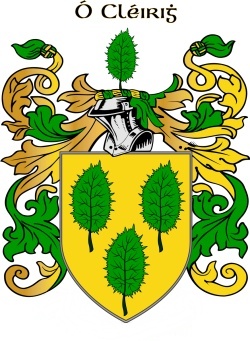 As an Irish surname, it is one of the oldest, with references in the Annals ('Four Masters', 'Ulster' & c.) as early as the mid tenth century: ua Cléirigh. They were originally a sept of South Galway, Kilmacduagh has been quoted (this is the site of an amazing ecclesiastical settlement). The 13th century, that turbulent period of Cambro-Norman intervention, saw them scatter to Co Mayo (Tirawley), Co Donegal (Tyrconnell), Co Cavan and Co Kilkenny.

The O Clerys of Tyrconnell were compilers of the 'Annals of the Four Masters', completed at Donegal in 1636: a case of a name living up to its 'trade'. It was in Co Donegal that they became hereditary poets and genealogists of the O Donnells. The seat of this family was at Kilbarron.

In 'Sloinnte Gaedheal is Gall' (1923) Woulfe writes that the name is 'often disguised, especially in Ulster, under the translated form of Clarke'.

In this article we shall look for all forms of the name as it appears in the 1659 'Census' of Sir William Petty, and then specifically the Clarke form in Griffith's 'Primary Valuation' (1847-60).

In the 1659 'Census' the following are found as a 'Principal Irish Name':

It would appear from the foregoing that the Clarke anglicisation of Ó Cléirigh is a late development. Of course, we must bear in mid the introduction of the name Clark(e) from Britain, although MacLysaght writes in 'The Surnames of Ireland' (1985) that Clarke 'usually stands for O'Clery in Ireland'. This seems to be borne out by the high figure in 1850s Cavan. Nonetheless, some bearers in the 6 counties would be of settler stock.

Clarke was the 32nd most numerous surname in Ireland in 1890. It was as common in England in the mid 19th century, and even commoner in Scotland.

In 1890 in the Registrar's records of births in Ireland, most Clarke births occurred in counties Antrim, Dublin, Mayo, Cavan and Louth.

Thomas Clarke (1858-1916) born on the Isle of Wight, to Irish parents (his Leitrim father was a British Soldier). He was the great leader and inspiration of the Easter Rising in 1916. Republican par excellence, he spent 15 years in a prison in Britain, under a regime designed to destroy its captives, often in solitary confinement. He was executed immediately after the Rising on 3rd May 1916.

Darren Clarke (born 1968 in Dungannon, Tyrone) the class golfer who delighted his fans by winning the 2011 Open Championship at Sandwich, Kent. He has also won two World Golf Championships events, notably in 2000 when he beat Tiger Woods.

Tell us about any famous CLARKE (or surname variant) you think we should add here. We will get our genealogists to check them out and add them to the list. Thanks!

Join the conversation with the CLARKE tribe

My Mother’s ancestors, I was told dropped the “E”, changing it to Clark, while some ancestors she remembered didn’t due to riff in the family. I kind of got the feeling division due to religion and that those who kept the “E were Catholic. Her family was from the county of Donegal.

(Part 2 of 3) According to research, the Kingdom of Brycheiniog will take part in an invasion of Brittany, France around 500 CE. But how could this be? Recent discoveries from DNA testing are unlocking the migration patterns of Celtic tribes as late as 800 CE to 1200 CE. The Clarke story begins in pre-history Ireland but this descendant will then move to Wales where the family can be traced back to their Welsh tribe Cydifor Fawr. This line and many of his kin will then travel to Brittany, France during the Dark Ages.

(Part 1 of 3) The Clarke name has a long history in the British Isles, but now DNA and some recorded history says one of its origins is from the north-west region of the Emerald Island. This Clarke story [dominated by DNA tribal marker R1b-L513, Subgroup C2] can trace their beginnings to the Finn Valley in Donegal, Ireland from 50 BCE. Perhaps the journey begins with the Clanna Dedad; Deda, son of Sen or Deda Mac Sin. The Clarke surname origin is possibly from the Dáirine [R1b-L513] who found the Kingdom of Brycheiniog, Wales around 300 CE.

My great grandfather was born on London to Irish parents. He served in the Canadian Corps of the Canadian Expeditionary Force during the First World War.

Areas of Origin for CLARKE

Write an email address and click 'Invite' to share this page with more members of the CLARKE tribe.

Discover where the CLARKE Family members live around the world

Show off the CLARKE Family Crest…