148,517 GALLAGHER members around the world 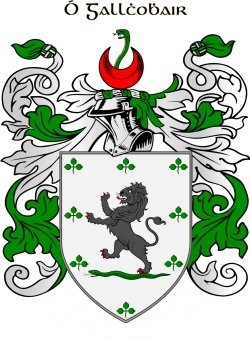 Design your own GALLAGHER Family Crest

Descended from Maolchobha, the King of Ireland (642-654), they were a leading family of the Cinel Conaill; early established in Tirconnel, their territory spread over the baronies of Raphoe and Tirhugh in the modern Co Donegal.

They were a strong military family, and played a powerful role in the forces of the O' Donnells through 1400s to 1600s. A translation from the Irish for their name, gallchobhair (foreign help), was possibly acquired in the 3 centuries when they were marshalls in the armies of the O' Donnells.

They excelled as ecclesiastics throughout the late medieval to the early modern period, providing a line of bishops of Raphoe and Derry, and other clergy in Co Donegal and adjacent Co Derry.

The Gallaghers, one of the principal septs of Donegal, are still very numerous there. In fact, statistically they were 14th in the list of most common names in Ireland, compiled after the Registrar's Report on Births of 1890.

In William Petty's 'Census' of 1659, we find Gallagher as a 'Principal Irish Name' in:

I found none in the lists for Co Derry, and the returns for Cos Mayo and Tyrone are missing.

The births distribution from the Registrar's Report of 1890 shows most births in counties Donegal, Mayo, Tyrone, Sligo, Derry and Dublin.

Laurence O' Gallagher, Bisop of Raphoe between 1466 and 1477, was cited on the Registry at Armagh for 'incontinence' and other crimes...'quae propter religionis et dignitatis scandalum'. Naughty fellow!

Redmond O Gallagher (1571-1601), Bishop of Derry, on the other hand, helped the Armada sailors wrecked off Donegal; had to go into hiding and was subsequently captured and executed by the English.

Frank Gallagher (1893-1962) born in Co Cork; he joined Sinn Féin in 1917, and after the electoral victory in 1918, worked with Erskine Childers on the publicity staff of the first Dáil. He was the first editor of De Valera?s newspaper, 'The Irish Press'.

Tell us about any famous GALLAGHER (or surname variant) you think we should add here. We will get our genealogists to check them out and add them to the list. Thanks!

Join the conversation with the GALLAGHER tribe

Attn: Witros I recently posted an article on my great grandfather Patrick Gallagher who was born in Aghavanny Leitrim which has been absorbed by Kiltycloger. Most of his children were born in Manor Hamilton which is between Kiltycloger and Drumkeeren. I have been researching my family and I do not know, but we could be somehow related. However, of my ggfather's 10 children, 8 immigrated to the US about 1892, but they all went to Chicago, not NY. Will let you know if I find any family connection. Jack Fritz

I would like to find out more about my family history. I have information back to Patrick Henry Gallagher of Donegal County and he was born on December 25, 1836. I know that his father's name was Michael Gallagher and his mother's name was Nellie Dwyer. If anyone has any further information on this, I would greatly appreciate it.

All I know is that my mother was brought to the U.S. by a catholic orphanage and obtained a green card before I was born in 1986. I only know that her maiden name was Gallagher. but I don't know the exact spelling. My mothers name was Bernadette Gallager if anyone knows any information about my family history I would love to hear it. Sean Michael Paul

I need to know about the origin of the Gallagher crest. Any help?

Greetings and Happy St. Patricks Day to all. I have been searching for information on my great grandfather James Gallagher. To the best of my knowledge, he was born in Co. Leitrim 1868-1872. On his New York City death certificate it lists his parents as James Gallagher and Bridget McPartland both of Ireland. He left Ireland around 1892 and settled in Brooklyn, New York. He married Anna Woods who was born in Drumkeeran, Co. Leitrim. I have been unable to find any information on my ggf James and would appreciate any help. Thanks.

Areas of Origin for GALLAGHER

Write an email address and click 'Invite' to share this page with more members of the GALLAGHER tribe.

Discover where the GALLAGHER Family members live around the world

Show off the GALLAGHER Family Crest…